The method was the same as that in Experiment 3a , except that the sphere moved in a concave arc. All met the same visual acuity requirement and received extra credit for participating.

The stimuli differed from those in Experiments 1 and 2 in the following way.

The Doors of Perception

That is, the sphere moved in a convex trajectory in one display and moved in a concave trajectory in the other. The order of presentation was counterbalanced. The simulated viewing distance and type of motion information were the same for both displays on each trial. The apparatus was the same as that in the previous experiments. Half of the observers were asked to indicate which of the two displays in a pair showed a convex trajectory, and half were asked to indicate which display showed a concave trajectory.

The 12 observers were undergraduate students at the University of California, Irvine, who received credit for participating.

The design and procedure were the same as those in Experiment 4 , except that in the combined size and speed information condition, the speed information was based on parallel projections rather than on the same simulated viewing distances as the size information. Ten observers participated in the experiments.

Todd asked observers to judge where a free-falling projectile would hit the ground.

Gray and Regan had observers estimate the time to collision for patterns of circular dots approaching along the line of sight. The angular size of the dots was held constant during the motion. When the angular size of the dots was large enough exceeding 2. Although the types of motion were different in those two studies and in our study, the results of all three studies indicate that for an object moving in 3-D, observers are not accurate in judging object motion from speed information when the moving object maintains a constant angular size.

There are two explanations that might account for the near-chance judgments of curvature magnitude and sign of curvature when only speed information is presented. It is second-order motion information that would be most relevant to judgments of curvature magnitude or sign of curvature. Although observers might have compared speeds at different positions along the trajectories to estimate changes in speed, they could not have used maximum or minimum speeds to compare curvatures between displays in the present study, because the initial speed was randomly selected for each display.

A second explanation for the finding of near-chance accuracy with speed information alone is that the interpretation of a change in speed as resulting from a change in depth requires a perceptual constraint of constant 3-D speed. Without this constraint, the displays could be interpreted as motion along a straight path with varying 3-D speed. On the other hand, size information alone does provide high accuracy at the closer distances. 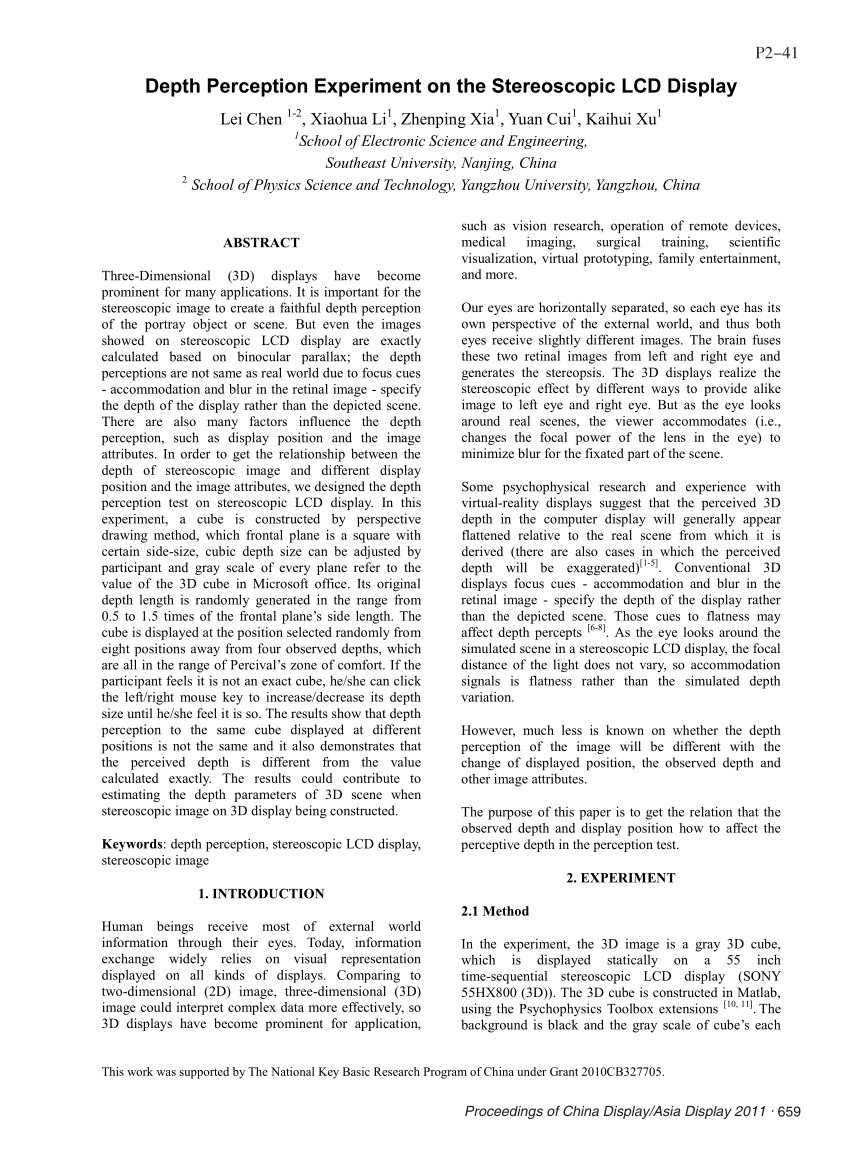 In these two experiments, size functions relevant to the discrimination were combined with two different speed functions that were not relevant to the discrimination because they were identical for both displays in a pair. Some display pairs in Experiment 3 had constant angular speeds; other pairs had speeds based on the same intermediate curvature. Accuracy was higher with a speed based on an intermediate curvature than with constant speed.

Some display pairs in Experiment 5 had constant angular speeds; others had speeds based on parallel projections, which have identical speed functions for convex and concave trajectories with the same curvature magnitude. Judgments of sign of curvature were more accurate with speed functions based on parallel projections than with constant speeds. The results of these two experiments suggest that speed information indicating that the path is curved in depth facilitates the perception of small changes in angular size as resulting from changes in distance.

Even with speed information not informative about degree of curvature or sign of curvature, that information could still indicate that the object was moving in a curved rather than in a straight trajectory. The visual system may have been constrained to find an interpretation of the size changes consistent with a curved trajectory, rejecting the alternative perception that the object was changing in size while moving along a straight path. The importance of the combination of angular size and speed information is also consistent with Craig et al. In any study using 2-D projections to study 3-D perception, the question can arise as to whether the judgments could have been based directly on 2-D variables rather than on a 3-D perception.

We used random initial sizes and speeds to prevent comparisons based on the maximum size or speed in a pair of displays. In debriefing, 56 of 98 observers indicated a strong 3-D impression in most displays, 27 indicated this for some displays, and 15 indicated that they did not have a strong 3-D impression. Our finding that in some conditions, accuracy from either angular size changes alone or angular speed chances alone dropped to near-chance level but accuracy based on a combination of these two sources of information was notably higher also seems inconsistent with observers basing their judgments directly on 2-D variables.

Overall, in this study, we examined the effects of angular size and speed on perceiving the trajectory of a single object moving in 3-D. The results demonstrated that 1 speed information alone does not result in accurate judgments of the magnitude or direction of a curved trajectory, 2 accuracy of judgments based on size information alone decreases sharply with increased distance, but 3 displays that include both speed and size information can provide high accuracy at a far distance even when the speed information is not directly relevant to the required judgment.

We would like to thank Brianna Phelps and Amy Vu for their assistance with this research and Adriane Seiffert and three anonymous reviewers for helpful comments. Skip to main content Skip to sections. Advertisement Hide. Download PDF. Effects of changes in size, speed, and distance on the perception of curved 3-D trajectories.